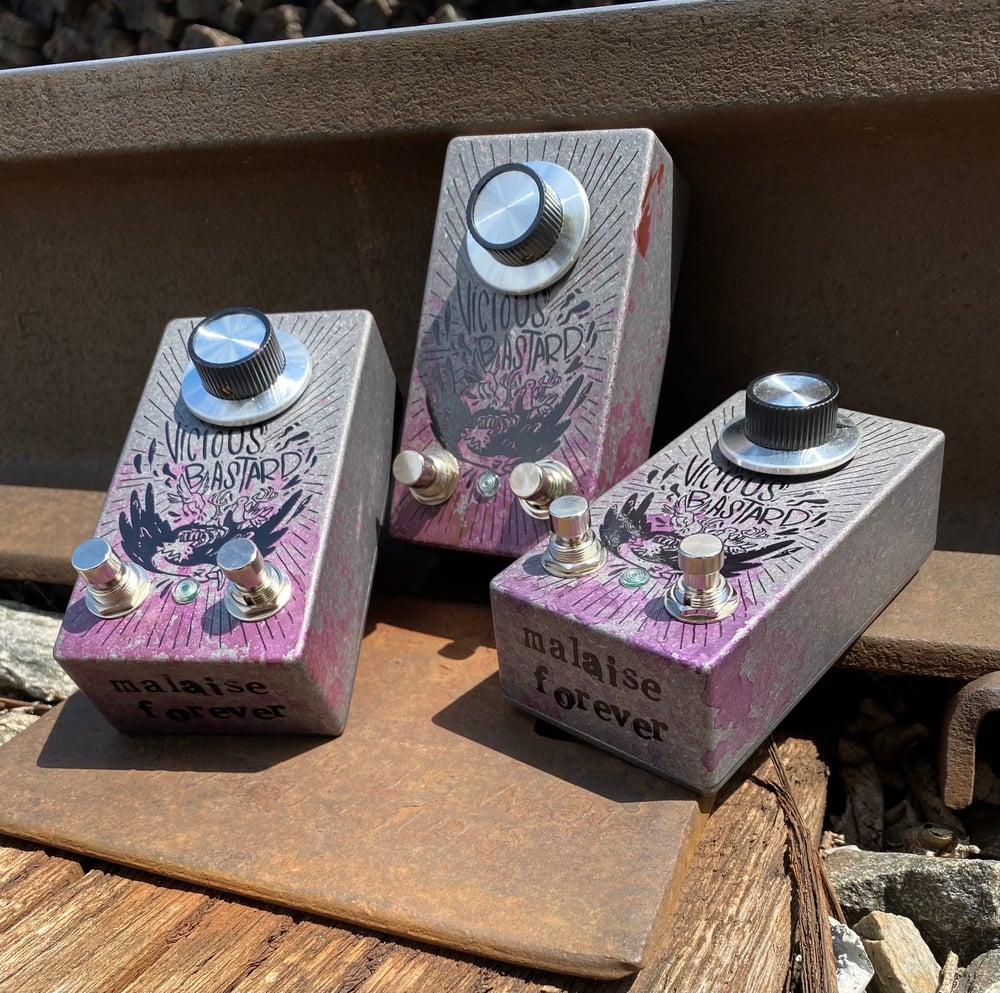 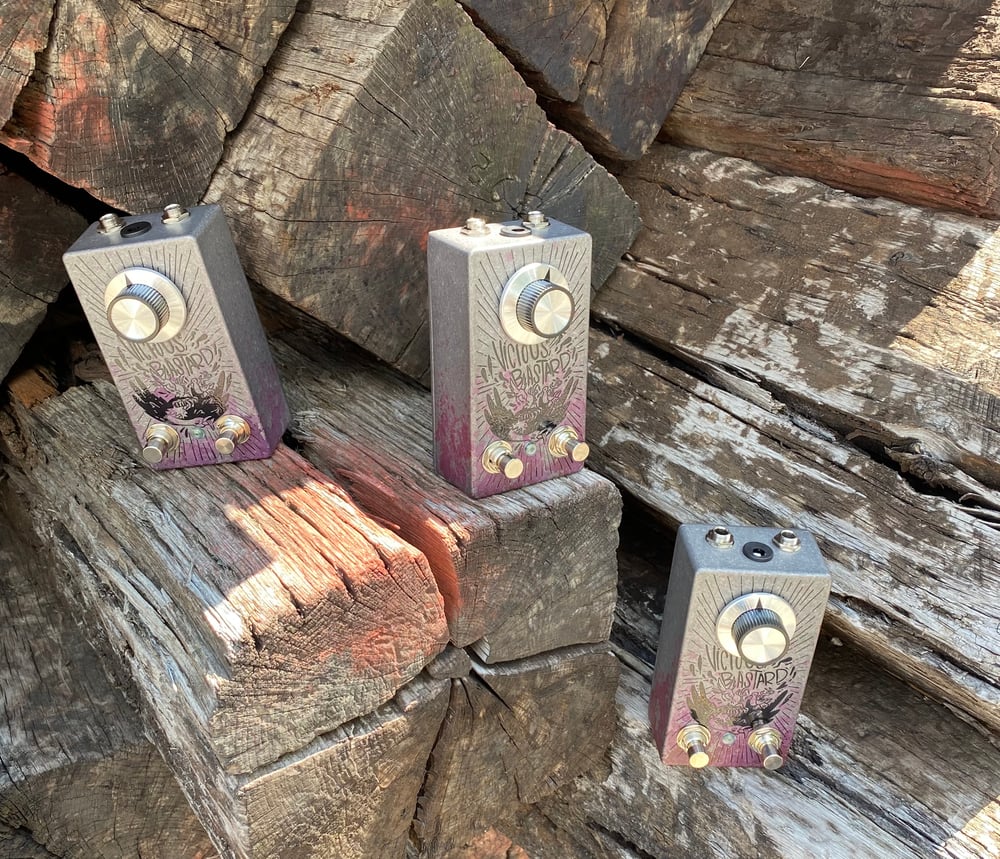 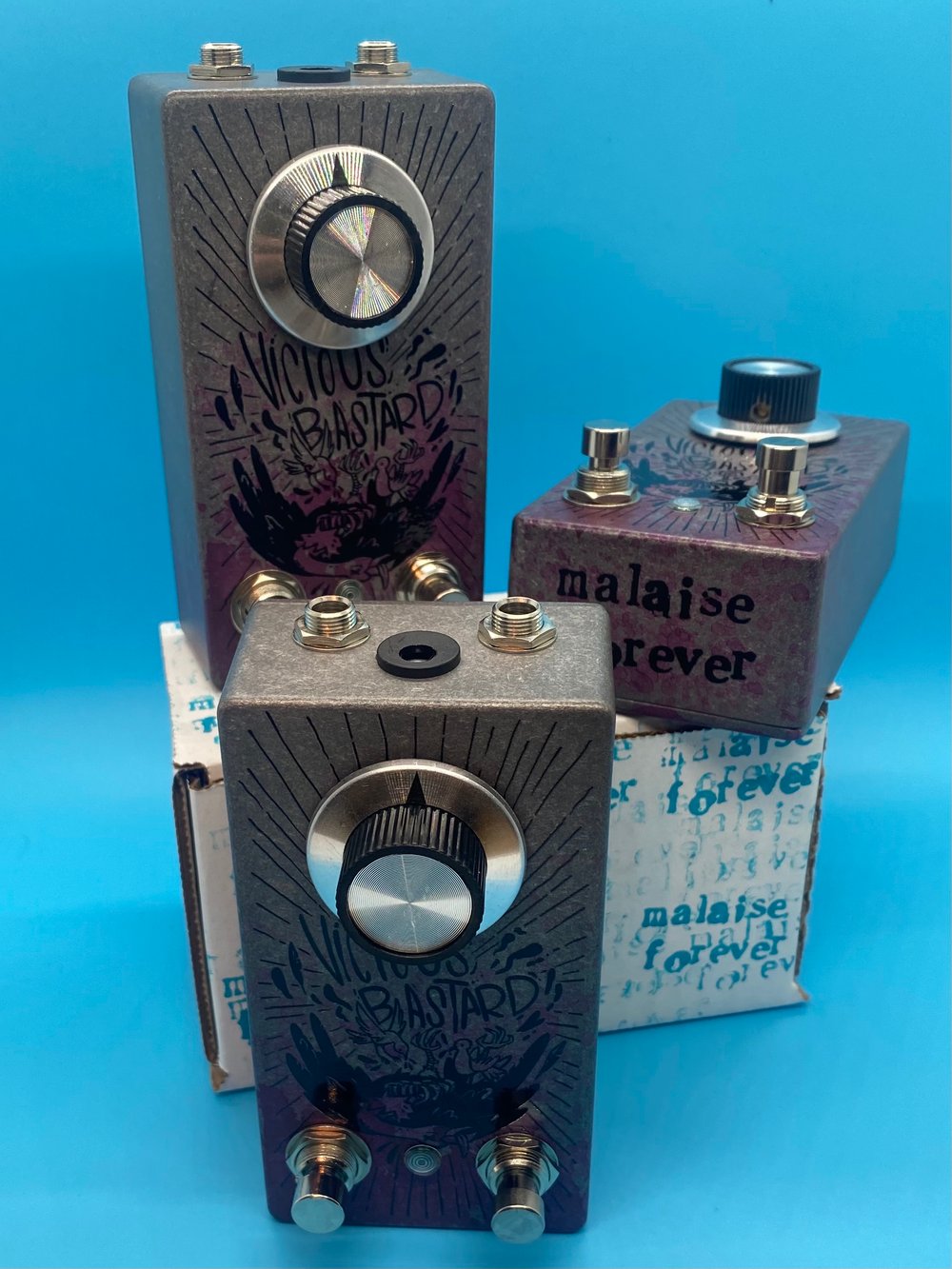 **PLEASE NOTE: this listing is for a preorder sale. Units will ship within 3 to 4 weeks of your order being placed. Thank you.

VICIOUS BASTARD is a loud, angry one-knob fuzz. There's a good amount of bass but it's still punchy with lots of lower mids, and a slight higher mid scoop. The treble is still intact so it's friendly to lead guitar as well. Vicious Bastard is based on the classic D*A*M* Meathead circuit and is hard clipped in two stages: first with asymmetrical silicon/Schottky diodes; then with blue LEDs after a final dirty boost stage for a uniquely raunchy quality to the note decay.

Also unique to the Vicious Bastard is the secondary gate foot switch which engages a heavy gate. Use this to trash up your tone significantly and satisfyingly.

Version 1.5 is a slight tweaking of the specs for the circuit, which I feel optimizes it. The following is a list of changes from v1:

- Adjusted bias and impedance of second stage to reduce noise/feedback when not gated. This change also slightly improves the low end response of the circuit, further optimizing it for bass or baritone. Additionally, this change allows for the circuit to clean up better with the instrument's volume knob.
- Adjusted tone filtering to allow for more high end to pass into the second stage, giving it a bit more sizzle and a little less of a slightly muffled sound.
- Changed clipping diodes in stage one to asymmetrical silicone/Schottky diodes. This gives a more aggressive and textured character to the clipping.
- Latching gate switch instead of momentary so that the full effect of the gate can be utilized without having to stand on the pedal for too long of a time.
- Update to BC550C transistors from BC550B. This may seem like nothing but the BC550C has more gain on tap and this allows for a slightly raunchier gated sound with a slightly longer decay time, which I think is neat.

Unity volume is around noon. If you are using a tube amp, or an amp that can be pushed into overdriven territory, it can create some wonderfully blown out sounds. An excellent selection for doomy guitar or for bass fuzz. Also features top-mounted Lumberg audio jacks and accepts a 2.1 mm center negative 9VDC power supply. It will also run on 18VDC, which increases headroom further and extends sustain in gated mode. Bludgeon your amp with VICIOUS BASTARD!